Barack Obama, Michelle Obama, and Joe Biden all try to push the story that they did such a great job in the White House and how there was no scandal.

Obviously, we all know that this doesn't reflect reality. The Obama administration was full of scandals and terrible policies.

Well, here is a list of some of Obama's "accomplishments" during his 8 years in office. 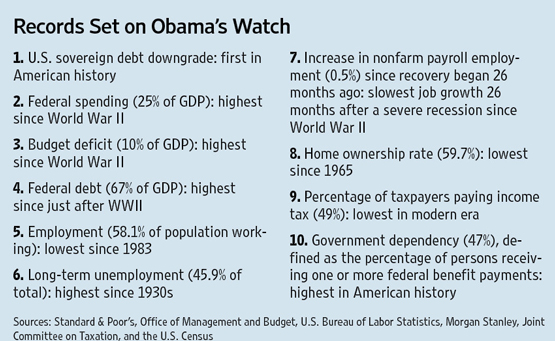 -First President to apply for college aid as a foreign student, then deny he was a foreigner.

-First President to have a social security number from a state he has never lived in.

-First President to be held in contempt of court for illegally obstructing oil drilling in the Gulf of Mexico.

-First President to require all Americans to purchase a product from a third party.

-First President to abrogate bankruptcy law to turn over control of companies to his union supporters.

-First President to by-pass Congress and implement the Dream Act through executive fiat.

-First President to order a secret amnesty program that stopped the deportation of illegal immigrants across the U.S., including those with criminal convictions.

-First President to demand a company hand-over $20 billion to one of his political appointees.

-First President to cancel the National Day of Prayer and to say that America is no longer a Christian nation.

-First President to threaten insurance companies if they publicly spoke out on the reasons for their rate increases.

-First President to file lawsuits against the states he swore an oath to protect (AZ, WI, OH, IN).

-First President to withdraw an existing coal permit that had been properly issued years ago.

-First President to fire an inspector general of AmeriCorps for catching one of his friends in a corruption case.

-First President to win a Nobel Peace Prize for doing NOTHING to earn it.

-First President to have personal servants (taxpayer-funded) for his wife.

-First President to keep a dog trainer on retainer for $102,000 a year at taxpayer expense.

-First President to fly in a personal trainer from Chicago at least once a week at taxpayer expense.

-First President to repeat the Holy Quran and tell us the early morning call of the Azan (Islamic call to worship) is the most beautiful sound on earth First President to side with a foreign nation over one of the American 50 states (Mexico vs Arizona).

-First President to tell the military men and women that they should pay for their own private insurance because they “volunteered to go to war and knew the consequences.”

-First president to allow Iran to inspect their own facilities.

-First president to have blood on his hands from Benghazi to the assassinations of several police officers.

-First president to trade 5 terrorists for a traitor

-First president to facilitate the Iranians to acquire nuclear weapons.

-First president to light up the White House in rainbow colors to honor men that lust after other men’s rear ends.

-First president to put young children in danger by forcing states to allow men in women’s restroom and showers.

The list could go on and on, but I think you get the idea by now. So much for being scandal free right?

Is She The Hottest Teacher In The World? She Broke The Internet With This Video

I can remember my days back in school. It seemed like I was never going to get out of school when I was a kid. Now that I'm older and I've been out of school for much longer than I was ever in school, it seems like it was all just a blur.

One thing I can still remember though is every single teacher I ever had. I was fortunate enough to have a couple teachers who were relatively attractive, but a math teacher who recently went viral puts every one of my teachers to shame.

Feds Arrest Over 600 Mexican Cartel Members Thanks to Trump

President Trump has been on a mission to combat the Mexican drug cartels and those involved in human trafficking at the Southern Border, and he's been doing a phenomenal job.

Since the President signed an executive order which is aimed at eliminating criminal organizations like the drug cartels, border agents have arrested more than 600 individuals involved in the Mexican drug cartels.

On Thursday, President Trump blasted America's mainstream media, calling them out on their corruption and for siding with China amid this whole coronavirus pandemic.

The only person in the Democratic primaries that I actually liked has called it quits and ended her presidential campaign.

Rep. Tulsi Gabbard hung up her hat after finishing extremely low in every primary and caucus that has been held so far. She left the primaries to be bought over by Bernie Sanders and Joe Biden.