It's true that some are. Take for instance this year with Dayton, Ohio and El Paso, Texas. But mass shooters being all white all the time, or even most of the time isn't accurate at all.

Just take a look at this photo below and tell me what you see. What is the commonality? These are the mass shooters from 2019. 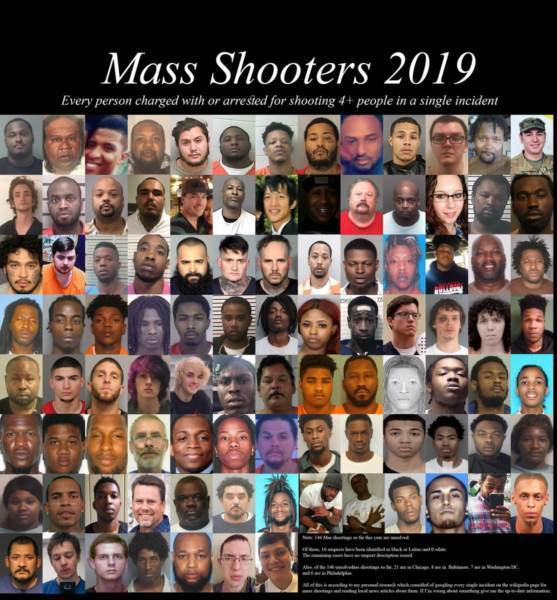 Is there anything in particular that stood out to you? Most of these criminals are not the far right, Trump-supporting white men that the media seems to continually vilify.

What's also very fascinating is that there was a study conducted that looked at mass shooters since 1966 to determine what they have in common. What they found is rather interesting and makes sense.

According to the LA Times,

First, the vast majority of mass shooters in our study experienced early childhood trauma and exposure to violence at a young age. The nature of their exposure included parental suicide, physical or sexual abuse, neglect, domestic violence, and/or severe bullying. The trauma was often a precursor to mental health concerns, including depression, anxiety, thought disorders or suicidality.

Second, practically every mass shooter we studied had reached an identifiable crisis point in the weeks or months leading up to the shooting. They often had become angry and despondent because of a specific grievance. For workplace shooters, a change in job status was frequently the trigger. For shooters in other contexts, relationship rejection or loss often played a role. Such crises were, in many cases, communicated to others through a marked change in behavior, an expression of suicidal thoughts or plans, or specific threats of violence.

Third, most of the shooters had studied the actions of other shooters and sought validation for their motives. People in crisis have always existed. But in the age of 24-hour rolling news and social media, there are scripts to follow that promise notoriety in death. Societal fear and fascination with mass shootings partly drives the motivation to commit them. Hence, as we have seen in the last week, mass shootings tend to come in clusters. They are socially contagious. Perpetrators study other perpetrators and model their acts after previous shootings. Many are radicalized online in their search for validation from others that their will to murder is justified.

Fourth, the shooters all had the means to carry out their plans. Once someone decides life is no longer worth living and that murdering others would be a proper revenge, only means and opportunity stand in the way of another mass shooting. Is an appropriate shooting site accessible? Can the would-be shooter obtain firearms? In 80% of school shootings, perpetrators got their weapons from family members, according to our data. Workplace shooters tended to use handguns they legally owned. Other public shooters were more likely to acquire them illegally.

So if we want to look at preventing mass shootings in the future, it looks like we need to address these four components.