Virginia is preparing itself as almost a battleground, but hopefully not a violent one. The protest is set to occur Monday morning against the tyrannical Governor Ralph Northam who issued a State of Emergency to ban all firearms from Capitol grounds ahead of the protest.

Here is the warning that State Senator Amanda Chase wrote on her Facebook page about the rally:

I want you to be aware of how we are being set up.

Does the Patriot Act ring a bell?

Does the National Defense Authorization Act ring a bell?

If people show up wearing any kind of uniform, patch or other symbol on their clothing signifying they belong to a militia and something goes wrong, you could/will be held as a domestic terrorist.

If anyone steps out of line, all it takes is one person, it may even be a government plant….if that plant does anything to disrupt the rally, you could/will be arrested as a domestic terrorist.

The Governor, using the media has already set the stage for this to happen.
He has already laid the groundwork to make the entire movement look like insurrection.

It will be used to put the rest of the nation on notice of what will happen to you, if you resist.

They have used the Southern Poverty Law Center over the last 15 years to lay the groundwork.

They have labeled us as potential domestic terrorist for a long time now.

Anyone who has ever related to the 3%er’s, a militia, or just belonged to any Patriot group…the groundwork has been laid to brand you as a domestic terrorist.

Sadly, I am posting this, knowing that the Governor of Virginia has declared a State of Emergency in our state. I want...

“I’m in Richmond and have just received information from a very reliable source concerning Monday’s rally against the legislature’s gun grabs. Antifa have rented seven buses to bring in their thugs to cause trouble. The report says they will be wearing MAGA hats and wearing NRA garb. They will pretend to be pro gun people. Meanwhile others posing as democrats holding anti gun signs will stand on the side. The Antifa thugs, pretending to be pro gun , will attack the sign holders. Making it look like the pro gun people have started violence. This is the plan. If you are attending the rally be aware. Be very careful.” 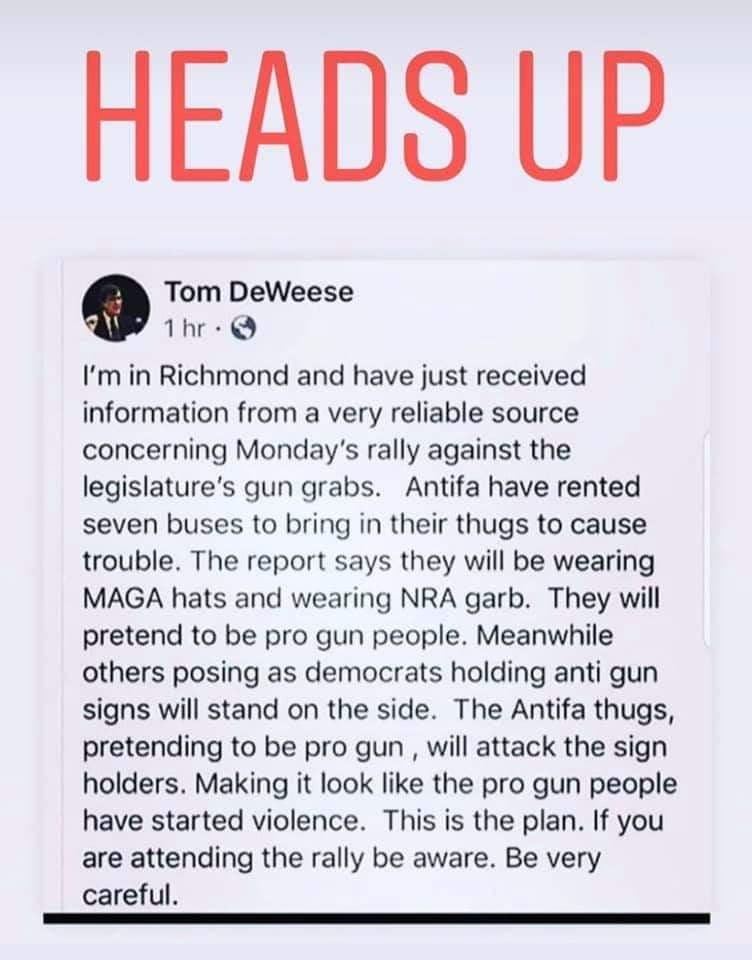 All eyes are going to be on Virginia.