Many of us have long suspected that global elitist and billionaire George Soros may be behind the Black Lives Matter and Antifa riots going on across the country.

As it turns out...we were right, and now we have proof.

One bit of information that we received earlier this month came from the rapper Lord Jamar after he revealed that it was indeed George Soros who was behind the whole Black Lives Movement.

Lord Jamar said, “It’s a movement that was given to us by, you know, George Soros and his f**king boys. Because they saw how things were going and they didn’t want it to go back to the 60s – to where we start having our own, organic movement.”

“That was a big f**king problem for them,” the rapper explains.

“‘So let’s give the people a movement that we can control – we’ll provide them the leaders…’ and all this type of s**t,” he says of the motivation behind controlling such a campaign.

Now we know that he is directly funding everything.

The largest share for the investment, $150 million, will be through a set of five-year grants to Black-led organizations focused on racial equality, the organization announced Monday.

“It is inspiring and powerful to experience this transformational moment in the racial justice movement,” Open Society Foundations’ President Patrick Gaspard said in a statement. “We are honored to be able to carry on the vital work of fighting for rights, dignity, and equity for oppressed people the world over started by our founder and chair, George Soros.”

Some of the organizations receiving the grants are fighting for expanding voting rights, while others are fighting for police reform. Recipients of this set of investments include Black Voters Matter, Circle for Justice Innovations, Repairers of the Breach and the Equal Justice Initiative, according to Open Society Foundations.

In addition to the five-year grants, Open Society Foundations said it is also making a series of investments totaling $70 million in “more immediate efforts to advance racial justice.”

During the Ferguson riots a Soros-linked organization MORE (Missourians Organizing for Reform and Empowerment) and OBS (Organization for Black Struggle) advertised for paid protesters in Ferguson. 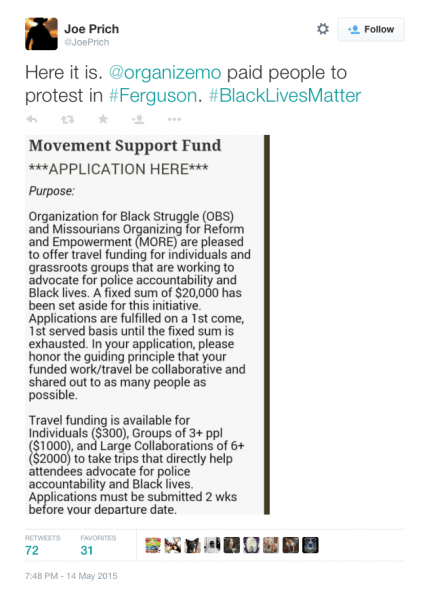