U.S. Army National Guardsman Sgt Derrick Miller was convicted in 2011 for murdering an Afghan man. This occurred in 2010. Miller is now 33 years-old. He is the father of two little girls. Free Army Sgt Derrick Miller. He is imprisoned for life all because he did what he had to do in order to survive.

Miller shot and killed an Afghan civilian. The only reason this happened was because the civilian was trying to grab Sgt Miller's weapon during questioning. This civilian was a suspected insurgent. More Per The Gateway Pundit:

Following the shooting, Sgt. Miller’s unit was implicated in a complex attack and Afghan National Army fighters that were assigned to stay with the platoon disappeared prior to the onset of the firefight. They hid behind a building.

As far as the case goes, the witnesses opposing Sgt. Miller are suspicious on two accounts. The first witness was a soldier that originally backed up the claims made by Sgt. Miller regarding the event, but when threatened with being named as an accessory and “being placed on legal hold so he could not de-mobilize”, he changed his story. The other witness was an Afghan translator that was promised citizenship in the U.S. in exchange for testimony.

This man was brought to the U.S. in January of 2011 and lived on Fort Campbell in a hotel on the base at $630 per month with a van dedicated to his transportation wherever he wanted to go – all of this was on the taxpayer dime. Morality is void in this case, save for the morality of Sgt. Miller.

All of Sgt. Miller’s men returned home unharmed from their deployment. Sgt. Miller returned home to Leavenworth where he is serving a life sentence after being charged for pre-meditated murder on the battlefield.

In 2016 many people gathered in DC to protest and push for Sgt Miller's release. 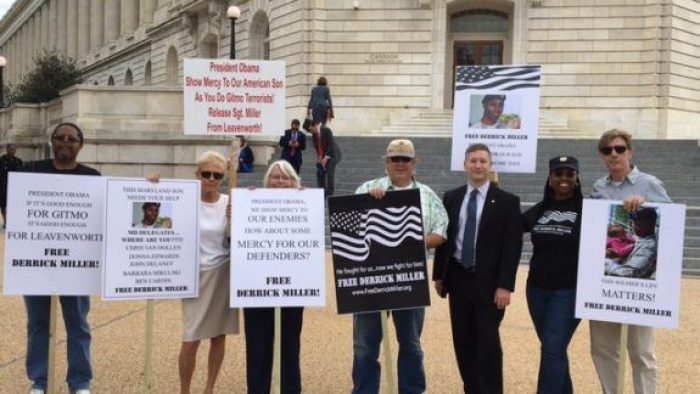 There is a letter from a Marine that survived the situation that led to Sgt Derrick Miller's arrest. He says Miller should be decorated for valor, not arrested for murder.