An anonymous DC person has came through with some groundbreaking information. According to this source, officials in the Democratic Party are in a complete panic mode over the Seth Rich murder investigation. On Saturday Kim DotCom admitted he was part of an operation with Seth Rich. The goal of this operation was to get stolen DNC emails to Wikileaks. This has the DNC in 'complete panic' and these officials are terrified.

That's right, it wasn't the Russians.

Kim Dotcom claims that he knew Seth Rich and he is the source.

I know for certain that the Seth Rich case has scared the shit out of certain high ranking current and former Democratic Party officials.

This is the reason why they have backed away from impeachment talk. They know the smoking gun is out there, and they’re terrified you will find it, because when you do it will bring the entire DNC, along with a couple of very big name politicians.

It appears that certain DNC thugs were not thorough enough when it came time to cover their tracks. Podesta saying he wanted to “make an example of the leaker” is a huge smoking gun.” 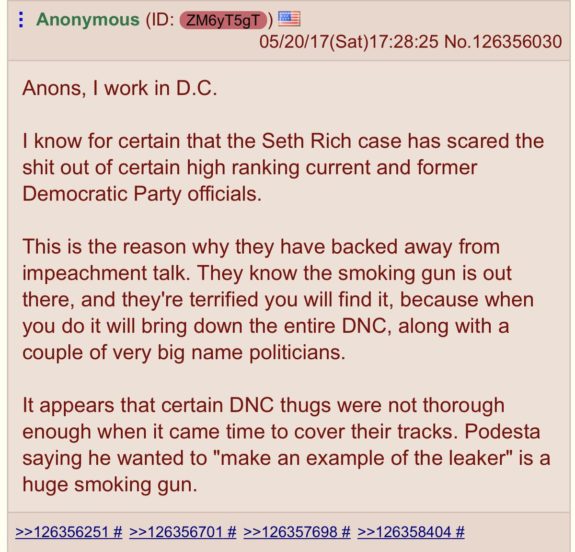 “The behavior is near open panic. To even mention this name in D.C. Circles [sic] will bring you under automatic scrutiny. To even admit that you have knowledge of this story puts you in immediate danger.

If there was no smoke there would be no fire. I have never, in my 20 years of working in D.C. Seen [sic] such a panicked reaction from anyone.

I have strong reason to believe that the smoking gun in this case is out o [sic] the hands of the conspirators, and will be discovered by anon. I know for certain that Podesta is deeply concerned. He’s been receiving anonymous calls and emails from people saying they know the truth. Same with Hillary.”

Sean Hannity has stepped in and acknowledged the panic by the DNC.

Here is the tweet where the announcement was first posted.

We will be following this story very closely. Stay tuned as we will provide additional details as they become available.

Check out our archive of Seth Rich stories.